I've left my iPhone comparison pictures on another camera so I don't have those up.  And thinking about it, there's enough of those on the Internet, and better quality.

So, here you go.  First, I've compared it to a Dell Axim and the Palm Zire 72.  As you can see, the G1 is much thinner but both the PDA have bigger screens.  I still use both of them for taking notes and writing in general but without connectivity, I have had to report to wired uploads or memory cards. 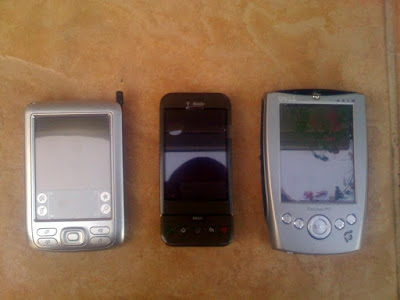 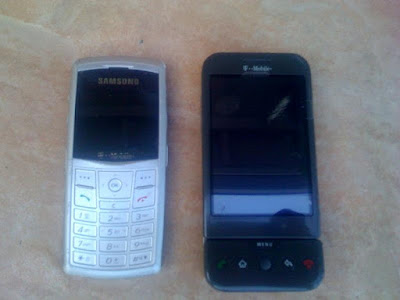 Here is a perspective with the Samsung Trace.

As you can see, the G1 is not that much bigger.  But the depth of the G1 is what makes the difference in your pocket.

Here's a couple of looks of the G1 on my XO. 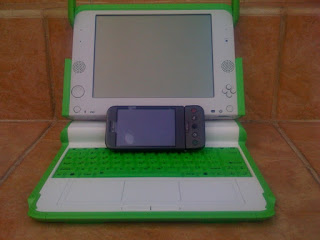 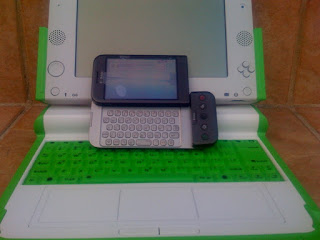 This is the angle I want you to see.  The protrusion on the right is pretty annoying.  I'm sure I'll get used to it.  Luckily for the G1 (and T-Mobile), this mobile device is also about the software, not just the hardware. 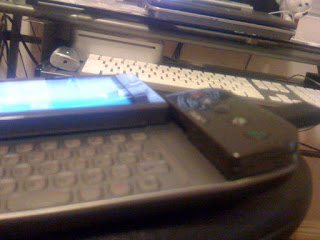 Here it is again but with my right hand holding the G1.  You can clearly see the high protrusion here.  Some sites try to avoid talking about it and go right to the software and about having a physical keyboard.  I think it's worth mentioning before you rush out to get one.  Think hard about this.  Play with a Blackberry and see what works best for you.
But you can't avoid the fact that Android is pretty cool. 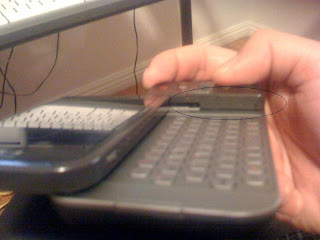 With one device, Google has altered the landscape and people, especially their competitors, should take notice.  Obviously, I have nothing to say about the design but Android provide handset makers an alternative to Windows Mobile and Symbian and strikes at Blackberry's consumer campaign.  The iPhone has nothing to worry about Android.  Yet.

But with this mobile platform, designs are only the limiting factors.
Posted by Paul_onxo at 12:53 PM