I like the iPad mini's for fractor.  It's light, smallish despite having a generous 8" screen, and a smaller than expected form factor largely due to its smaller bezels.  Now, it appears the next Nexus tablets should follow suit as well with their own updated form factor.

According to early specs, we could be looking at not only improved screen resolution which would bring us better text for reading.  7" Is fine for many things but reading small text isn't that great.  With an improvement from 1280x800 to 1900x1200, we should see greater improvements, bane for optometrists I'm sure.

Also on top is the smaller bezels around the screen that should make the 7" tablet even easier to carry in one's hands or bag.  It's already pretty good.  So expect the next Nexus 7 to be lighter as well.

It's inevitable that the Nexus will be compared to the iPad mini.  The Nexus 7 should continue to beat the iPad mini in terms of price.  I'm expect the next updated Nexus to be priced the same as the current version at $199 just as Apple will price the mini at $329. 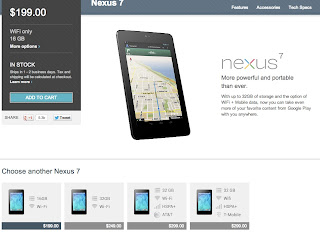 The differentiator for me will be the battery life.  The iPad mini doesn't have the same staying power of its bigger brother, iPad but it still beats the pants off the Kindle Fire, Nexus, and Galaxy for similar sized screens.

Personally, I like to see Google improve on that.  However, I'm not optimistic.  Mobile without long battery life puts a serious handicap on the whole experience.  Maybe we'll be surprised.  We'll just have to see.

But forget the iPad.  It's the Kindle Fire that will be the Nexus 7's main competitor.  By my reckoning, the Fire is still hold its own.  I had expect the Nexus 7 to beat back Amazon's tablet offerings in a convincing manner.  However, the Kindle Fire tablets have surprised my expectation in terms of sales and support.

I'm not sure that this will change in 2013.  Google needs a differentiator for the Nexus 7 beyond just impressive specs.  We'll know at Google I/O if Google has something up its sleeves to make Android tablet computing different from that of Amazon and even Apple.